Living close to the coast in the province of Cadiz in SW Andalucia, we are never short of two things, plenty of freshly caught delicious fish and an abundance of sunshine. However, as winter draws in and the days get cooler, the food I cook becomes warmer and richer, and my fish stew is a wonderfully warming dish which can be served for lunch or dinner.

This Andalucian Fish Stew is inspired by a typical Spanish “cazuela de pescado” which is a simple recipe, but the depth of flavour is quite incredible. I prefer to make this with hake ‘merluza” or monkfish ‘rape” but really any firm white fish will work just fine. Just as you need a firm fish, make sure your potatoes are waxy so that they don’t disintegrate in the sherry laced juices. I always use fresh tomatoes but if no tasty ones are available to you, just use tined but drain them first.  Feel free to add any prawns or mussels. Serve with plenty of fresh crunchy bread to mop up the leftover juices.

When I make this dish, I wash it down with a chilled Fino or Amontillado Sherry, or a local un-oaked chardonnay or a young fruity red wine.

400g tomatoes either skinned, de-seeded and chopped or  a drained tin of chopped tomatoes

750g potatoes, peeled and diced – use a waxy potato such as Charlotte

a handful of chopped parsley 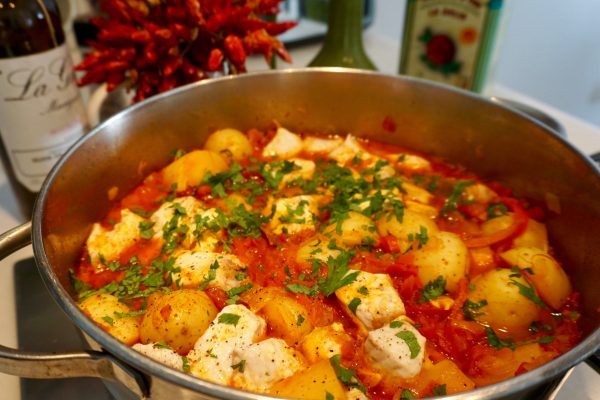