One of the things I love most about living in Vejer is that this corner of Andalucia has so much to offer throughout the year. Residents of Cadiz spend all year preparing for the city’s Carnival – held annually in February/March and centred on Shrove Tuesday. It’s a riot of colour, music and fun, and is arguably the best carnival in all of Spain. This atmospheric, ancient city is a wonderful place for a long weekend – as Rick Stein knows! It’s somewhere I love showing to culinary explorers as part of my gourmet food tours.

Music is central to Cadiz Carnival, with groups of gaditanos (people of Cadiz) joining together as groups of ‘chirigotas’ to perform comic, satirical songs throughout the city. Choirs sing at every corner, accompanied by musicians and usually plenty of fireworks. The costumes are dazzling, too, bringing colour to the streets over the full 10 days of carnival time.

As you’d expect, I always look out for the foodie element of any fiesta, and Cadiz Carnival doesn’t disappoint. There are stalls piled high with erizos de mar – the most beautiful sea urchins, fresh from the Atlantic, eaten raw and perfect with a glass or two of manzanilla. If you’ve got a sweet tooth you’ll love the pestiños on offer – crunchy little morsels of dough, flavoured with sesame and anise, then fried and drenched in honey syrup or dusted with cinnamon sugar. 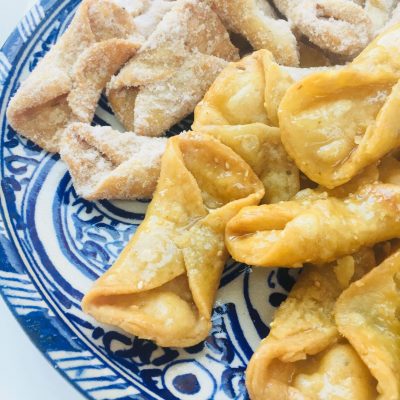 They’re enjoyed by thousands of gaditanos over the course of the carnival and are so easy to make at home – serve them on Shrove Tuesday as a change from pancakes and fill your house with the scents of Andalucian spices and citrus. I love making them for Easter, too!

For the honey syrup

For the cinnamon sugar

Based on 85 traveler reviews
Vejer in the Press… Again