Known for its flamenco and tapas, the southern Spanish city of Seville is much more than spotty swirling skirts and pretty picture-postcard scenes. Cutting-edge cuisine, world-class art and intriguing Moorish architecture make for the ultimate all-in-one city destination. 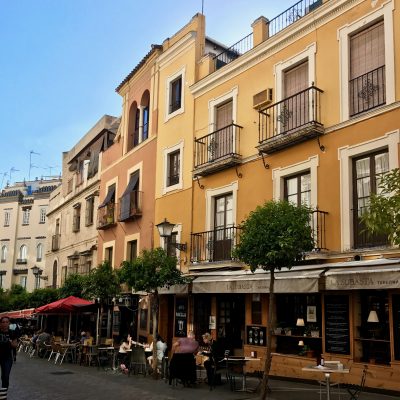 Whether you want a traditional joint with barrel-tables, serving tortilla (Spanish omelette) and the famed pringá (super-tender slow-roast pork) – try Casa Morales or Antonio Romero. Or a hip hang-out with a vertical garden, lobster hot dogs and craft beers galore – Lobo Lopez and Mammaracha. Seville is gourmet heaven and best seen via a walking tapas tour.

The Mercado Feria in Seville

Año Murillo (Year of Murillo) is a year-long celebration of the highly influential baroque painter’s 400th anniversary. Known for his religious paintings, as well as less exalted subjects, Murillo is Seville’s cultural pride and joy for 2018. Follow routes to see his paintings in churches, convents and museums, as well as finding out how the city looked in his day, plus 17th-century concerts, theatre – and gastronomy too!

Seville is home to Europe’s oldest royal palace still in use, the Alcazar – its most spectacular section was built in the 14th century by Pedro the Wise, an enlightened Christian monarch who used Moorish craftsmen to create exquisite plaster arches and handpainted tiles. A century later, Christopher Columbus met Queen Isabella here to plan his voyages. 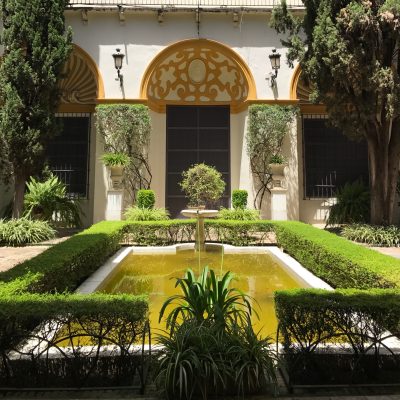 One of Seville’s many tranquil courtyards

For fans of HBO series Game of Thrones, Seville is hallowed ground. The Alcazar was used as the Water Gardens of Dorne in Seasons 5 and 6, while the Atarazanas (Royal Shipyards) doubled as the dungeons of King’s Landing where *spoiler alert* the dragon-killing secret weapon was stored. Italica, a Roman site just outside the city, played the Dragon Pit for the climactic meeting of Season 7 final episode. Films shot in the city include Lawrence of Arabia, Kingdom of Heaven and Star Wars: Attack of the Clones. 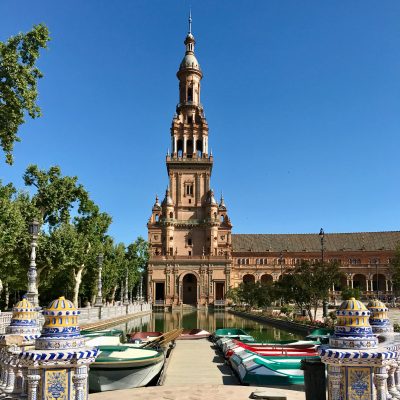 The magnificent Plaza España in Seville

A fun and gently energetic way of taking in the sights is to go on a bike tour of the city. With 120km of bike lanes, year-round sunshine, and few hills to negotiate, Seville is ideal for cycling, especially the vast Parque Maria Luisa, with broad shady avenues and majestic pavilions from the 1929 Ibero-American Expo and the Plaza España. You can rent push-bikes, electric bikes, or electric bike-scooters, with or without a guide.

Let a small boat gently glide you up the river Guadalquivir, past the mighty Torre del Oro. Travel in time from the 12th-century Moorish era, to the 20th century with the riverfront 1992 World Expo buildings – especially enjoyable on a hot summer’s day, as the temperature on the water is noticeably cooler. We like Guadaluxe’s electric boats – clean, green… and quiet! 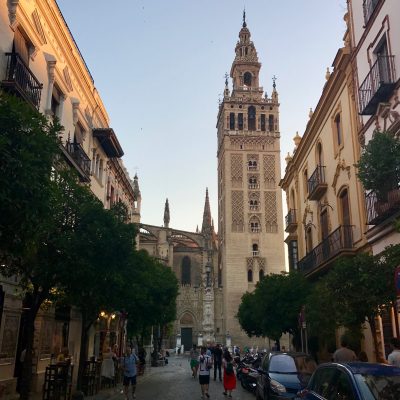 The Cathedral is the largest Gothic basilica in the world, its mighty sandstone edifice married with the old mosque’s minaret, the Giralda. You can see Columbus’s magnificent tomb, paintings by Murillo and his fellow Golden Age artists Zurbaran and Valdes Leal – and a stuffed crocodile! 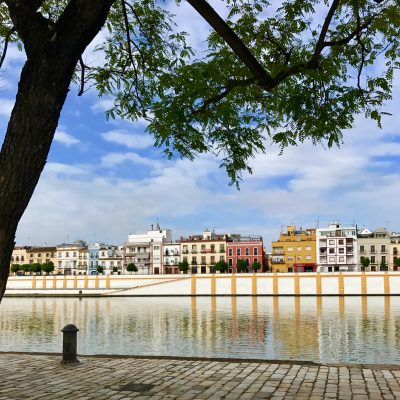 The view of Triana across the river from Seville

Azulejos (ceramic tiles) have been made in Triana, on the river’s left bank, since Roman times. Find out about techniques, and see colourful examples galore, in a small and little-known museum, Centro Ceramica Triana, which also looks at the area’s cultural heritage, notably flamenco.

10. Drive into the Sunset

Explore glorious Andalucia – within easy reach of Seville are the Sierra de Huelva, cork-oak forested mountains for Jamon Iberico and hiking; Jerez, home of Sherry wine and purebred horses; Granada, city of Lorca and the Alhambra; and of course Vejer, picturesque white hill town which kisses the Costa de la Luz’s pristine beaches, and, of course, is home to Annie B’s Spanish Kitchen. 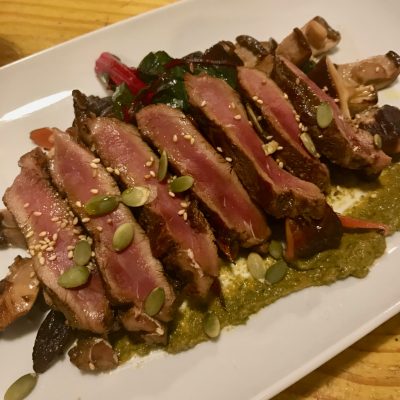 An example of the fabulous food on offer in Seville, from “Restaurante conTendedor”

For a truly authentic taste of Andalucia, whether it be Cadiz, Jerez, Sherry tastings or a bespoke trip, why not book one of my tours

Based on 85 traveler reviews
Sherry: The Beginner’s Guide to One of Spain’s Greatest Wines