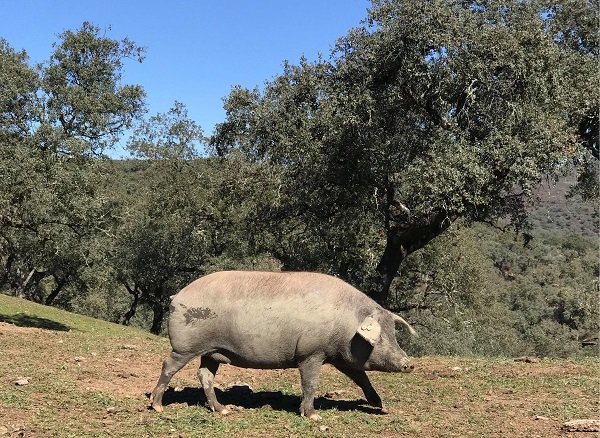 Jamón Ibérico is one of the most exclusive and sought after charcuteries in the world. But it can be confusing when presented with the various Spanish Jamón options. So I’ve put together a guide to help you understand more about what you’re eating, where it comes from, how it’s produced and where you should be buying this most magnificent of meats. Enjoy!

What is Jamon Ibérico?

Jamón Ibérico is the meat of a cured rear leg of free range black Iberian pigs fed specifically on acorns for the last 4 months of their 15 month life. Quintessentially Spanish and exclusive to four different areas of Spain, it is probably the most delicious and sought after cured (salted and air-dried) of meats in the world. There are four different qualities of Jamón Ibérico, depending on the mixture of two key elements:

It’s the healthy fat of the oleic acid-filled acorns eaten which marbles the meat, giving it the unique sweetly nutty flavour and melt-in-the-mouth texture. You should be able to stand a freshly sliced plate of Jamón Ibérico de Bellota on its end and the Jamón won’t fall because the soft fat sticks to the plate.

When I first came to Spain I was always pulling off my fat from Jamón because I was brought up to believe that fat kills. My Spanish friends, like vultures, would grab it from me.

It took me a while to get my head around the fact that the fat from Jamón Ibérico is good for you – it is a healthy fat. You can put it on your tongue and it literarily just melts away. The oleic acid from the acorns creates good cholesterol, making Jamón Ibérico de Bellota a health food – sought after by gourmands and health freaks alike.

There are four different qualities of Jamón Iberico. The current labelling system started in 2014. It is simple and straightforward for the consumer. See below;

Jamón 100% Ibérico de Bellota: this is the finest, from 100% pure-bred Iberico pigs that have eaten only acorns during the final period, the montanera (the acorn season).

Jamón Ibérico de Bellota: this is not pure-bred but have to be 50-75% Ibérico . They too have fed exclusively on only acorns during the montanera.

Jamón Ibérico Cebo de Campo: These pigs have to be 50% Ibérico but are fed mainly on grain with a few acorns added.

Jamón Ibérico de Cebo: Again, these pigs need to be 50% Ibérico, but they are not free-range and they eat only grain.

I used to think that 100% Ibérico de Bellota signified that it had eaten 100% acorns but it does, in fact, mean that it’s 100% pure Iberian pig. Both the black and red labels have eaten acorns during the final four months of their life, roaming free-range across dehesas (oak-covered farmland). But the black is pure Iberian pig, while the red is a blend of Iberian and Durco, the pink pig.

The production of Jamón Ibérico is a strictly controlled process, thus ensuring the consumer is guaranteed quality. The pigs are descended from wild Iberian pigs, although now are more friendly and curious. They have distinctive features: 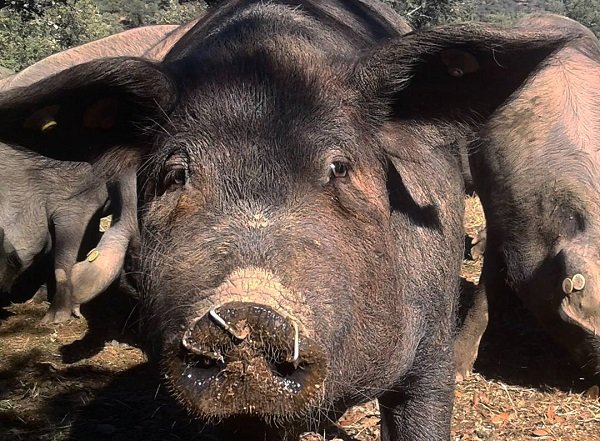 It should be noted that Jamón is the back leg of the pig; Paleta is the front leg. Both are cured in the same way but the Paleta for less time at each stage as it is smaller.

A Short History of Spanish Ham 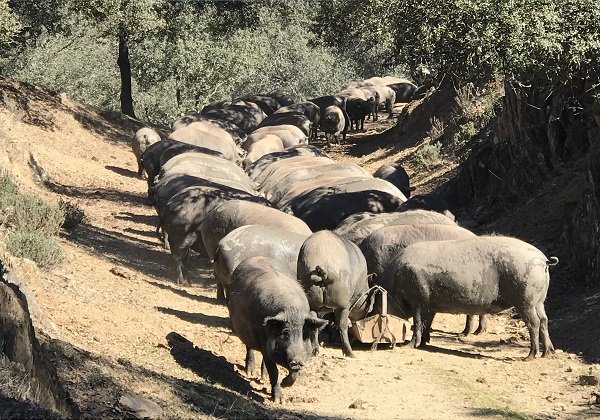 Prior to refrigeration, one of the few ways people had of preserving meat was using salt and air – salt to extract the moisture and air to dry it out. History tells us that the Phoenicians and Romans both preserved pork in Spain in this manner. The mixture of the native pigs, local salt, the acorns and the dry winds of the dehesas (cork forests) produced this unique delicacy, until the 700-year occupation of the Moors when all pigs were banned. Following the Reconquista in 1492, Isabella and Ferdinand filled the area of Al-Andaluz with pigs, making sure that any masquerading Muslim or Jew would have no meat to eat. It became fashionable to have a Jamón hanging at your window as a sign you were Christian. This made pig farming and pork popular again.

Just as the Sherry and Mojama (air-dried tuna) of the area rely on the winds for air drying, the hilly areas of the dehesas of the Jamon production zones offer similar dry winds required to preserve food following salting.

Jamón Ibérico has been a delicacy in Spain for many years but was a latecomer to the tables of those outside Spain. It was only in the 1990s, after formation of the EEC, that it became legal to import Jamón Ibérico into member states. It wasn’t until 2005 that USA then allowed importation.

Where Does Jamón Ibérico Come from? 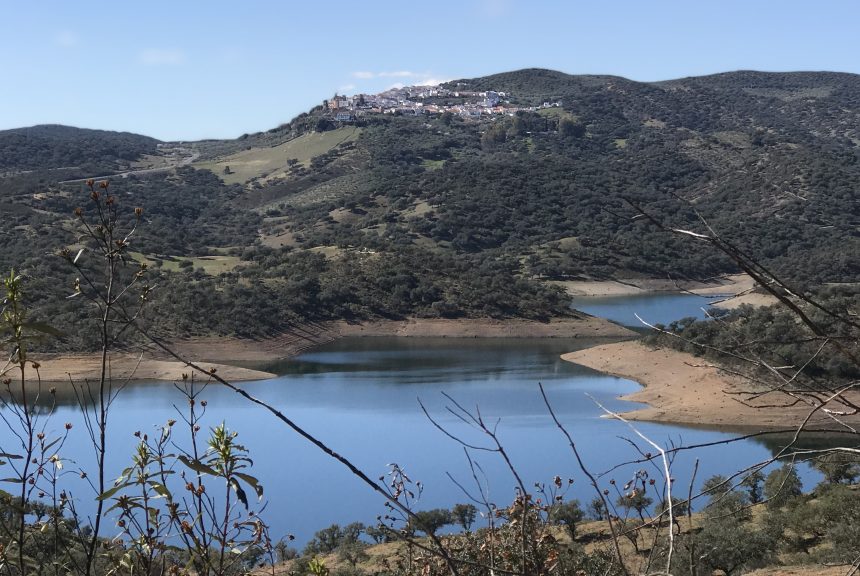 Spain does not only have DOs (Denominación de Origen) for wine, it also has DOs for food. DO status is a guarantee to us, the consumer, that what we are buying is what we expect. Each DO has laws to which the producer must adhere in order to enjoy the DO umbrella. The four Jamón producing DOs are:

One of the key regulations is that each pig has dehesa space the size of a football field through which to roam freely. So if you have 300 pigs you must have a dehesa the size of 300 football pitches. Even though the pigs are all in the corner of one, it’s still the roaming area required by the DO.

There are other Jamón producing areas of Spain such as Teruel and Trevelez giving us Jamón Serrano from the pink Duroc pig fed on normal pig food. Serrano lacks the magic fat of Jamón Ibérico.

Top producers to look out for include Joselito, Jamones Eiriz and Embutidos Fermin.

How is Jamón Ibérico Produced? From Farm to Table… 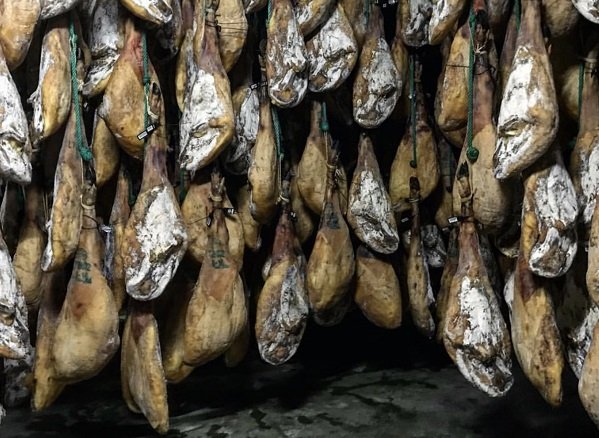 Pigs are typically sacrificed (they never use the term slaughter) when they are 14-15 months old. The best Jamón Ibérico will reach your palates up to four years later. Here is a typical agenda:

March: The 2½ month old pigs arrive with the porquero (pronounced ‘porkero’ – pig farmer) mid March, weighing an average of 2.5 arrobas* each (30 kilos). They are then inoculated, snouts ringed, ears tagged with chips containing the history of their breeding and then branded to stop any becoming lost amongst a neighbour’s herd. For pure 100% Cerdo Ibérico, breeding is normally done using artificial insemination. The gestation period for a pig is three months, three weeks and three days. They are then sent out into the dehesas where they immediately munch their way through the remaining fallen acorns of the season. By this time, the winter rains have left the dehesas filled with grass and foliage providing enough food until the beginning of June. 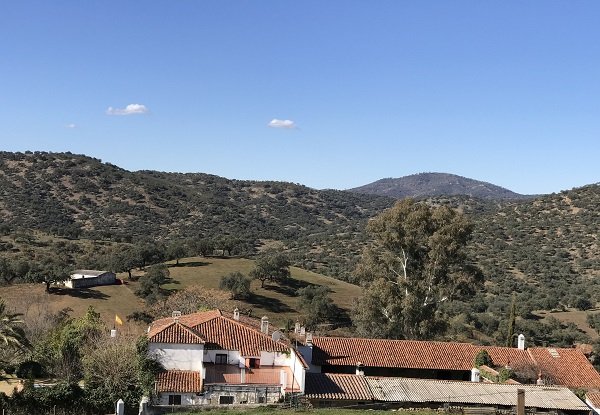 June: Natural grazing fodder comes to an end and the pigs are taken in. It’s important to curtail their wandering to prevent them from losing weight. They are contained in a specific area and fed on pienso (fodder pellets), normally a mixture of oats, wheat, barley and soy, bound together with manteca (pork fat!)

15 September: The pigs are sent back out into the dehesas, still being fed on pienso.

October – February: The Montanera – 4 months of acorn feeding commences. Acorns make them grow fat and each pig can easily gain 20 kilos per month. This is critical because, to go to market, each pig much weigh a minimum of 150 kilos. Acorns make them thirsty, too, so the farmer sets the water higher or lower so that the pigs have to use their legs to get up and down to the water, causing the fat to move between the muscles.

February: Now 14-15 months old and weighing 150 kilos following the montanera, the pigs head off to be ‘sacrificed’. By law this has to be done in a legal slaughterhouse, never at the pig farm. 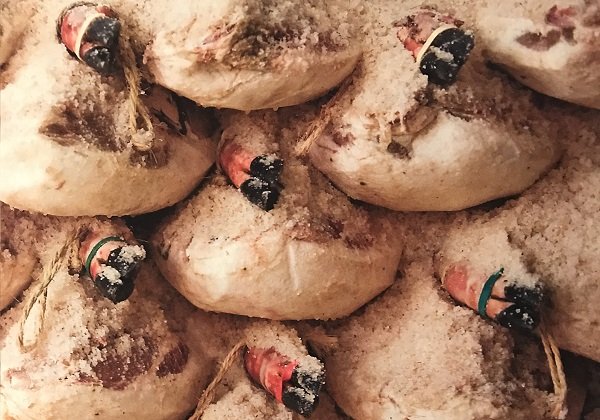 How Much Does it Cost?

There is Jamón to suit every budget. You just pay more for better quality. I hate to really upset you if you live outside Spain, but this is what we expect to pay here in the country:

How to Eat & Pair it with Wine/Sherry 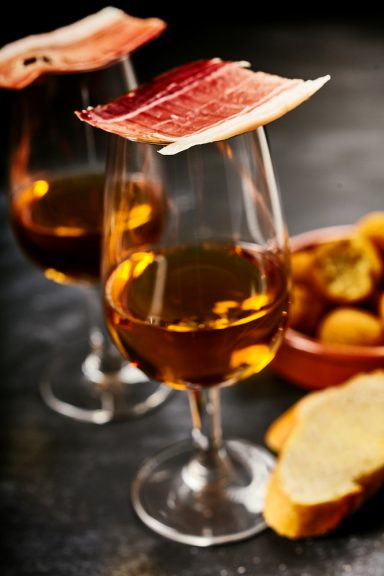 Jamón Ibérico is the most typical tapa of Spain. It is also one of the most expensive, so it’s a real treat. Almost always sliced in the bar in front of you, expect to pay €22 for a ración (plateful). Served with picos (little bread sticks) and a copa of Fino Sherry it’s my moment of bliss. It’s also great with a beer or a fresh white wine.

In Huelva we were served a local white wine made from the Zalema grape. It is often served as a starter along with plates of cheese and prawns, too.

You do not need to keep Jamón in the fridge. You will never ever find them in fridges in Spain – just hanging in bars and restaurants. Keep in a coolish place in your house. If sliced, keep in a tupperware container.

Where Can You Buy it Online? 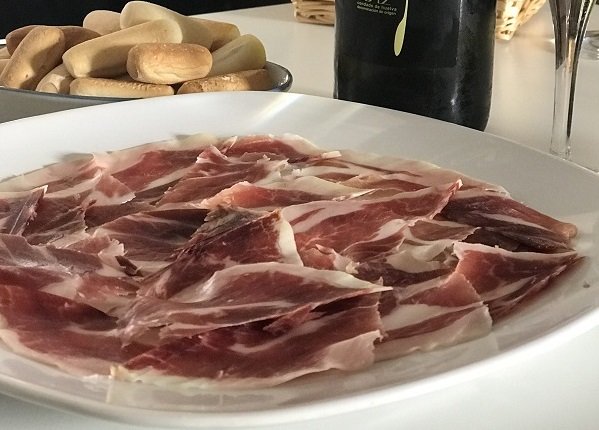 Enjoyed my introduction to the very finest Spanish ham? Find out more about my new Jamón tours.

A Love Affair with Squid

Love Chorizo? Then you will love this fabulous Chorizo & Chestnut Soup
Scroll to top